1. Introduction
To date, an effective vaccine for HIV has yet to be realized [1]. Here, we consider vaccines that fight the virus by inducing responses from cytotoxic T lymphocytes (CTLs). One key roadblock to an effective vaccine is that CTL-mediated attack of HIV infected cells is temporarily effective, but only until HIV mutates to escape such attack. Research has suggested that the HIV virus remains fit despite mutations within or near most CTL epitopes, and that escape at only a relatively small number of these locations will result in a less fit virus [2–4]. Consequently, it has been proposed that a successful vaccine would elicit responses exclusively against epitopes that are resistant to mutation or are otherwise characterized by a superior immune response [2–11]. Note that the need to elicit responses to multiple epitopes in a single individual may be important for effective viral control [2–11]. Unfortunately, CTL epitopes, like other small peptides, do not readily produce an immune response when injected on their own, even when combined with toll-like-receptor (TLR) agonist adjuvants known to boost the immune response to administered antigens [12]. Here, we describe a vaccine delivery mechanism that can elicit interferon gamma ELISPOT responses to multiple specific CTL epitopes. The delivery mechanism is a synthetic, non-living vector consisting of large d,l poly(lactic-co-glycolic) acid (PLGA) microspheres that carry multiple specific CTL epitopes. While PLGA microspheres have been investigated previously (see, e.g., [13,14] and references therein), we improve on this delivery mechanism in several respects. First, we demonstrate the need to include adjuvants positioned both inside and outside the microspheres, in contrast to previous work [13]. Second, we demonstrate in mice that it can be used to elicit substantial CTL responses to more than one epitope in the same individual, whereas previous studies have investigated only the inclusion of a single epitope. Finally, we compare our approach to current ones that elicit responses to specific epitopes, arguing our approach is simpler and more efficient.

1. Results
We were able to manufacture the spheres to have specific mean diameters of any size ranging from 1 to 20 M, with a tight size distribution about the mean using a precision spray drying technique [15]. The geometric standard deviation(GSD) of diameter was typically 1.3–1.4 throughout the manufacturing process for each of the particle sizes produced in our experiments (Supplementary Fig.
1). We confirmed that PLGA microspheres were taken up by both mouse and human DCs. Time-lapse videos of human dendrocyte phagocytosis events after incubation with 8 M diameter spheres and 11 M diameter PLGA microspheres respectively were qualitatively evaluated. Dendrocytes were observed to phagocytose up to three of the 8 M spheres (Fig. 1a, b, and Supplementary Video 1) and a maximum of one of the 11 M spheres (Fig. 1c, d, and Supplementary Video 2), consistent with their relative volumes. A time lapse video of C57BL/6 dendrocytes incubated with 10 M
standard size polystyrene spheres was similarly prepared to ensure
that the size of the C57BL/6 dendrocytes was similar to that of the human cells (Fig. 1e, f, and Supplementary Video 3). Qualitative analysis of the C57BL/6 video showed a maximum of one 10 M polystyrene microsphere phagocytosed by a given C57BL/6 dendrocyte suggesting that the C57BL/6 dendrocytes were similar in size to their human counterparts. We performed our studies with 11 M spheres, the largest to be phagocytosed and thus capable of delivering large doses of epitope. The largest amount of peptide that could be loaded homogenously distributed in a sphere was 0.5% by weight. Spheres were loaded with ovalbumin (OVA) peptide (SIINFEKL) and vesicular stomatitis virus (VSV) peptide (RGYVYQGL), known mouse CTL epitopes [12]. C57BL/6 mice were inoculated with a single inter-dermal injection at the base of the tale and sacrificed after 14 days. Fresh splenocytes were harvested and subjected to IFN gamma ELISPOT analysis by strict Streeck, Frahm Walker criteria [16] against the same epitopes used in the inoculation. No inflammation at the injection site of any mouse was noted. We evaluated various adjuvants for use in the spheres themselves and in the solution surrounding the spheres loaded with the OVA epitope. For use in the carrier solution, we considered Monophosphoryl Lipid A (MPLA), a less toxic derivative of lipopolysaccharide that has been approved for use by the US FDA as an adjuvant for a marketed HPV product. MPLA acts as an immune-stimulant by signaling through the Toll-Like Receptor (TLR) pathway, specifically TLR4 [17]. MPLA has been used in commercial vaccine formulations as a viable alternative to LPS, the lipid A portion of Salmonella Minnesota Re595 lipopolysaccharide which is far too toxic for use in a vaccine [18,19]. For use in the spheres, we evaluated a CpG oligodeoxynucleotide
(CpG ODN) specific for mouse cells, CpG ODN 1826. The composition of this adjuvant mimics bacterial DNA and so acts to stimulate the immune system through the TLR9 pathway [20–23]. The CpG ODN, is being used in at least one registered FDA monitored clinical trial, but has not yet been approved by the FDA for use in conjunction with a specific vaccine [21]. We found that the presence of CpG inside the spheres had a significant positive effect on the immune response (Fig. 2a, P = 0.0002). In addition, although previously published findings [24,25] showed increased CTL responses when MPLA was placed in the microsphere, we observed strong CTL responses only when MPLA was included in the carrier solution to rehydrate the microspheres for injection (Fig. 2b, P = 0.0002). We believe MPLA in the carrier solution acts to stimulate the tissue macrophages in the area where transformation to dendritic cells takes place, after which phagocytosis and antigen presentation occur. We found that presence of epitope inside the sphere was also critical. In particular, free epitope, even when combined with CpG and MPLA but without the presence of spheres produced essentially no immune response compared to the formulation using the PLGA loaded microspheres for the OVA (Fig. 2c, P = 0.0015) and for the VSV epitope (Fig. 2d, P = 0.0002). We evaluated the dose response to inoculation with 11 M microspheres loaded with 1%, 10% and 100% of maximum epitope for the OVA and VSV epitopes. The OVA epitope dose response showed a plateau beginning at the lowest level with no statistically significant difference between the 1% and 100% loaded levels (Fig. 3a, P = 0.25), whereas the VSV epitope showed a statistically significant increase in immune response with increasing loaded concentration atthe loading levels tested (Fig. 3b, 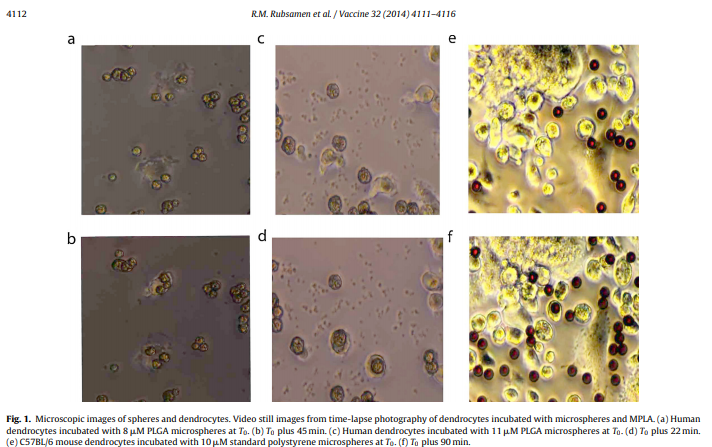 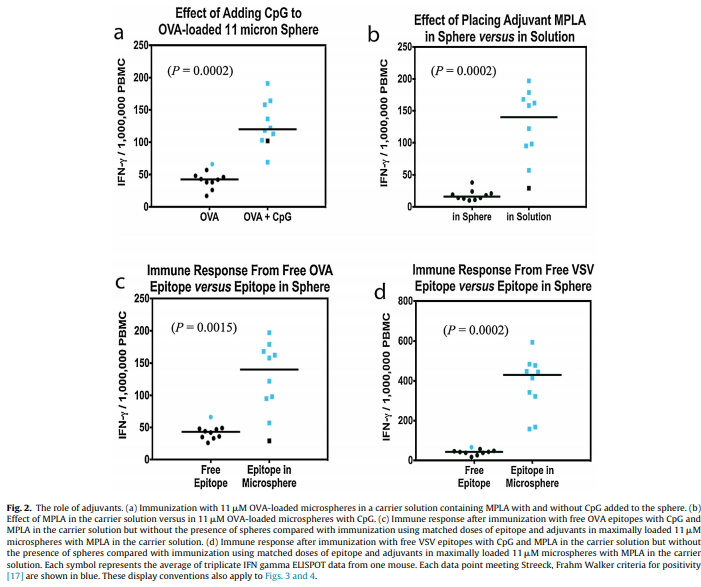 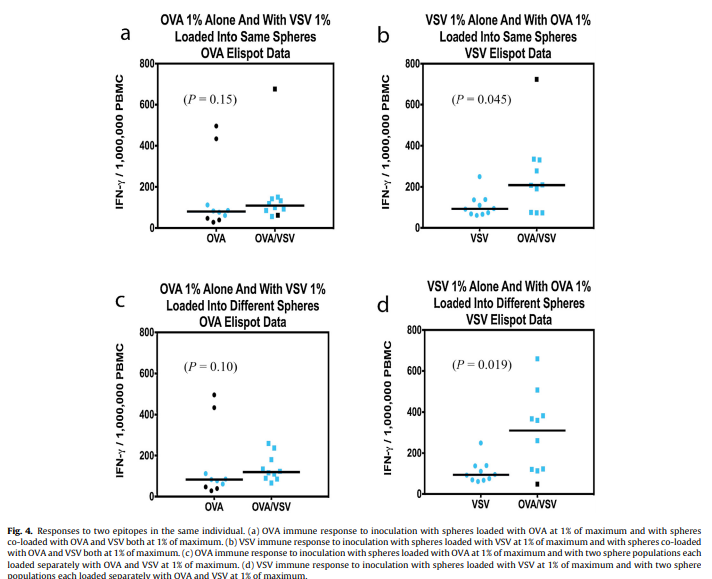 We showed that MPLA (TLR4 agonist) had a statistically significant effect on the immune response when it was in the carrier solution but not when it was inside the sphere, in contrast to work by others [13,14,26]. For both epitopes tested, even with the addition of both CpG and MPLA, the free epitopes alone produced an immune response that was significantly lower than when the microspheres were used for microencapsulation of the epitopes and CpG. Finally, in contrast to previous studies which incorporated only a single epitope in spheres (e.g., [14]), we showed that it was possible to elicit an immune response from each of two epitopes delivered simultaneously, when the two epitopes were loaded into in the same spheres or different spheres.
Recently, two methods have been described for eliciting immune responses to multiple specific epitopes. In both approaches, the epitopes to be targeted are linked together with short peptide sequences, sometimes referred to as a “string of beads” [27]. In one approach, the DNA corresponding to the string is inserted in a modified vaccinia Ankara (MVA) vector. Immune responses have been elicited in mice using this technique [10]. In a second approach, the DNA string is administered with electroporation [28]. Immune responses in Macaques have been elicited in
this manner [11].
In contrast, we sought to use a biodegradable, microsphere based vaccine delivery platform as a way to allow one or more unmodified epitopes to easily be incorporated into a dosage form. This approach could streamline the development process by allowing epitopes to be added and subtracted from the formulation during the design phase without requiring the identification of appropriate linker peptides, an involved process [29], and subsequent confirmation that the desired individual epitopes would be properly presented. Further, given the need for an HIV vaccine in countries lacking medical infrastructure, we sought to make the administration procedure as simple as possible without relying on special
medical devices.

PLGA microsphere-based vaccines have been described in the literature and their limitations have been discussed. In particular, it has been pointed out that the tertiary structure of the delivered antigen may degrade due to exposure to solvents used in double-emulsion sphere fabricating technologies, high temperatures used during spray drying processes, or incompatibility with excipients [30]. We manufactured our microspheres avoiding double emulsion sphere manufacturing technology using a precision spray drying process that operates at room temperature [15]. In addition, because we are delivering the epitopes themselves and not a large protein antigen, tertiary structure stability in the formulation is not an issue, as our results demonstrate.
Kanchan has reported the potential effect of particle size on the immune response stating that nano-sized particles may be more likely to produce a cellular immune response compared with micron-sized spheres [31]. However, in a review article, Agaki concludes that more studies with precisely sized spheres will be required to fully understand the relationship between the size and activity of vaccine-loaded biodegradable spheres [32]. Here, we sought to use microspheres sized near the diameter of a dendritic cell and found that class I epitopes could indeed elicit a cytotoxic T-lymphocyte response in mice and have contradicted the notion
that large microspheres are not suited for this purpose as has been
suggested [31].
Aluminum salts have been widely used as vaccine adjuvants but may not be effective in vaccines relying on T-cell activation [33]. Here we explored the use of other adjuvants and demonstrated that CpG within the microsphere and MPLA in the injectate enhanced T-cell activation. This is an important finding since MPLA has been used within PLGA microspheres for vaccine design previously and others have suggested that placing MPLA within the microsphere is the preferred approach [13,14,26]. The only TLR agonist being used in an FDA approved vaccine (Cervarix)isMPLA(TLR-4 agonist). TLR9 has been used in FDA cleared US clinical trials [34]. Because of this clinical history, we evaluated the potential beneficial effect of both of these adjuvants in our vaccine design.
In our experiments, we measured immune responses by interferon gamma release. Additional work should be done to demonstrate cytolytic activity (see, e.g., [14]) and antiviral efficacy. Further work will be required to study the residence time of the phagocytosed microspheres within the antigen presenting cells and to characterize the minimum microsphere size at which a substantial immune response is seen. Also, experiments involving the simultaneous delivery of two epitopes both exhibiting a dose–response curve would increase the ability to detect attenuation of the immune response of one epitope by another. Finally, applications of this delivery mechanism to vaccines for other pathogens where CTL targeting is potentially relevant, such as hepatitis C [35–38], and influenza [39,40], should be investigated.

Acknowledgements
We thank Darrell Irvine of the Ragon Institute for helping us review previous research in the area, Nicole Frahm of the Fred Hutchinson Cancer Research Center for immunochemistry advice, Dan Barouch of the Beth Israel Hospital for his interest and support, Niraj Patil for assistance with illustration preparation, Craig Rouskey for helpful comments and Jonathan Carlson of Microsoft Research who helped review the manuscript. This work was supported in part by a Qualifying Therapeutic Drug Discovery Project Grant from the United States Government and a grant from Microsoft Research.